The Portfolio Strategy of Mohnish Pabrai

Mohnish Pabrai is one of the most successful value investors in the world. Since his start in 1995, he has achieved an average return of about 26% per year by copying Warren Buffett's approach (at least according to himself). When his portfolio strategy turned out to be too risky in 2008, Pabrai made some significant adjustments and enhancements to his strategy. This enabled him to reduce his permanent capital losses to about 1% of his portfolio, as well as manage cash very efficiently.

Mohnish Pabrai, by the way, is also the guy who paid USD 650,000 to have dinner with Warren Buffett and the one who wrote the famous value investing book "The Dhandho Investor ".

Table Of Contents
1
What you will learn in this article
2
Background of Mohnish Pabrai
3
Track Record
4
Target: At least doubling of the investment within 2-3 years
5
Efficient cash management through staggered return targets
6
Copying the ideas of others
7
Learnings and adjustments of the strategy due to the financial crisis
8
Current holdings
9
Further resources on Mohnish Pabrai

In this article, I would like to take a closer look at Mohnish Pabrai's portfolio strategy and the key success factors.

What you will learn in this article

Mohnish Pabrai started investing in 1994-95, when he had just sold his IT business and had about USD 1 million in the bank.

Sometime earlier, Pabrai had started studying Warren Buffett and his investment philosophy. In the process, he realized that there was actually no one else besides Buffett himself who was applying Buffett's strategy in practice. Therefore, Pabrai decided to be the first here and copy Warren Buffett's approach.

His long-term strategy is to turn USD 1 million into USD 1 billion within 30 years. The required return for this is 26% per year, or a doubling of capital within about 3 years.

"Take up one idea. Make that one idea your life - think of it, dream of it, and live on that idea. Let the brain, muscles, nerves, every part of your body, be full of that idea, and just leave every other idea alone. This is the way to success." Swami Vivekananda

Following Swami Vivekananda's mantra, Mohnish Pabrai has been focusing exclusively on this goal ever since.

After 4 1/2 years in business, i.e. at the end of June 1999, Pabrai's portfolio had already reached a value of USD 5.1 million. This was equivalent to an annual return of 43.4%. Pabrai owned two stocks during this time, each of which had increased in value more than a hundredfold. Unfortunately, Pabrai's investment in just these two stocks was quite small. However, he also profited from the internet hype, buying shares cheaply and letting others drive the shares up.

Then came the financial crisis and with it the big collapse in the portfolio: Between 1 July 2007 and 31 March 2009, the fund achieved a return of -47.1% as a result of the crisis.

Target: At least doubling of the investment within 2-3 years

As we have seen, Mohnish Pabrai has set himself quite an ambitious absolute return target (namely 26% per annum), which he has derived from his specific goal of doubling the portfolio a thousand fold within 30 years.

In his view, you cannot beat an index by trying to beat the index. Instead, investors should rather set absolute return targets.

Basically, this means nothing other than that we need a somewhat different investment approach than, for example, the one regularly suggested by the financial media.

If we want to achieve an appropriately high return target, we must only buy shares that we believe can at least double or triple in value within a maximum of two to three years.

Conversely, this also means that if, for example, a share costs USD 10 and we think it could be worth 13, 15 or USD 17, we should not spend time analyzing the share. Which is quite unusual, of course, because such shares are usually seen as very good investment opportunities and the stock market media are full of them.

So a good understanding of the intrinsic value of a share is the essential prerequisite for this approach.

Buying only stocks that can at least double in value within 3 years is already good. But Mohnish Pabrai goes one step further. To manage his portfolio cash efficiently, he has set even more demanding return targets for the last 25% of the portfolio cash.

The next 10% is only invested if a stock offers the potential for a tripling of the stake (3x) within 2-3 years. And so on. Here is the summary:

So if say 85% of the portfolio value is invested, then we need at least one investment with the potential to quadruple the stake (4x), otherwise we stick with cash.

This approach essentially means that there is some cash in the portfolio at most times, simply because the appropriate investment alternatives are lacking. Actually, there has to be a major economic crisis like in 2008 for the portfolio to be fully invested (because only then are there enough investment opportunities with a corresponding return potential).

Copying the ideas of others

Of course, it is difficult to find an investment with a potential return of 2x or 100%. However, of the more than 50,000 listed companies worldwide, we only need to invest in 2-4 per year (or less).

To illustrate how we can find such investments, Mohnish Pabrai quotes one of his role models, namely Charlie Munger, Warren Buffett's partner at Berkshire Hathaway. Pabrai once had dinner with him, during which Munger spoke about the 3 essential investment strategies:

According to a study by the University of Arizona, an investor who consistently copied Warren Buffett's strategy would have beaten the S&P 500 by 11%. In fact, we only need to look at the 13F reports to find out what investments Buffett (or other well-known investors) made last quarter.

"Take a simple idea and take it seriously."

Learnings and adjustments of the strategy due to the financial crisis

After Mohnish Pabrai's portfolio suffered a loss in value of almost 50% in the 2 years following the outbreak of the financial crisis, he began to analyse the situation. One of Pabrai's key guiding principles is that knowledge accumulates.

Based on his analysis, he identified 2 weaknesses of this approach:

Mohnish Pabrai's first reaction: further diversify the portfolio, i.e. no longer have only 10, but perhaps 20 stocks in the portfolio, each with a lower allocation. You can see this effect clearly in the number of portfolio holdings, right after the financial crisis: 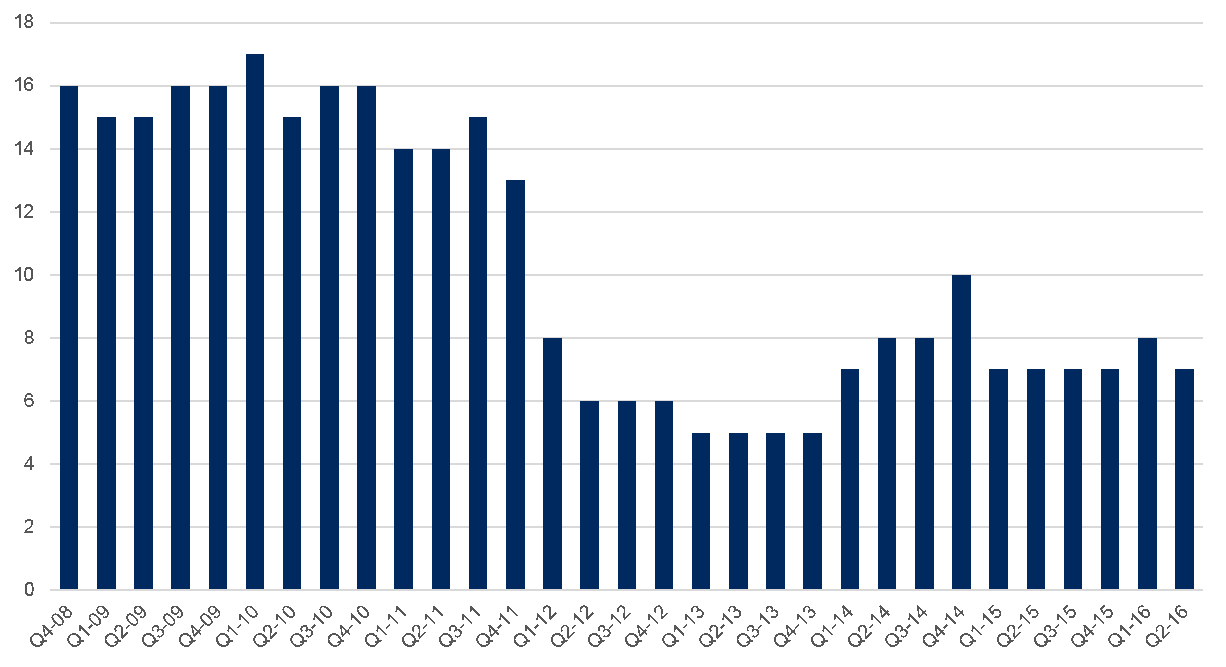 At that time, Pabrai was logically fully invested. But he made other changes to his strategy. First, he introduced his infamous pre-investment checklist that year, and second, he has since been having a pre-investment conversation with another investment manager or investor to test his idea.

These two adjustments have resulted in the permanent capital loss - a risk indicator - in the portfolio shrinking to less than 1% of the portfolio value.

As already mentioned, Mohnish Pabrai's portfolio is currently quite concentrated. On the one hand, Mohnish Pabrai currently only has a total of 3 stocks in its portfolio, and these are Micron Technology Inc., Seritage Growth Properties and Alibaba Group Holdings.

Here is the data on Dataroma's portfolio:

Mohnish Pabrai interviewed by Forbes (a very interesting interview with many insights on his investment strategy):

12 Valuation Ratios that you should know as Investor

What is Merger Arbitrage? How It Works and Why Warren Buffett Uses It!