The Magic Formula by Joel Greenblatt

The Magic Formula by Joel Greenblatt is the perfect book for my first book review: It is sufficiently short - the book has only about 160 pages in total and can be read comfortably in 2 evenings - and there is only one essential content, namely the said magic formula.

Joel Greenblatt uses the example of a boy who sells chewing gum and later even opens a few shops to illustrate his magic formula. Analogous to this example, the entire book is also written very clearly and simply. All the essential concepts are explained well and simply by Greenblatt, for little boys, so to speak.

What you learn in this article

How the magic formula works

First of all, the magic formula is not really a formula, but rather a systematic approach to filtering out 30-50 stocks from an extensive stock universe, which may include, for example, all stocks with a market capitalization above USD 1 billion. Essentially, the formula is about buying very good companies at a cheap price. The magic formula maps exactly these two factors via two different ratios:

The return on capital

EBIT stands for Earnings before Interest and Taxes, the sum of net current assets and net fixed assets represents the invested capital.

First, the return on capital tells us how much profit a company makes compared to the capital invested. The higher this number is, the better the company is rated for the magic formula.

If both of them were to offer you a 50% share in their shop for USD 100,000 each, which company would you rather invest in? Of course, in the one with the higher profit per USD invested.

However, would both owners now actually demand the same price for their share? In a strictly rational world, of course not. For a 50% share in a company with a return on investment of 50%, you would normally have to dig deeper into your pocket. Nevertheless, the great thing about the stock market is that it is more or less often characterized by the irrational behaviour of market players, which means that sometimes really good companies can be bought at bargain prices. We now "only" have to understand how to filter out the good companies that are currently available at a good price.

For this purpose, Joel Greenblatt introduces us to the earnings yield as a tool. The profit margin is defined as follows:

As above, EBIT here stands for earnings before interest and taxes. Enterprise value (EV stands for Enterprise Value) is the sum of the company's market capitalization and net financial debt. Market capitalization is the value of the company on the stock exchange, i.e. share price times number of shares. Net financial debt is, in simple terms, the company's debt adjusted for any cash on hand or assets that can be converted into cash in the short term (which would allow the company to repay some of its debt in the short term).

So what exactly does the earnings yield tell us? Actually, it only tells us how much earnings a company makes in relation to the current value of the company. In other words, the higher the earnings yield, the cheaper the company is in comparison. It is important to note, however, that the company value in Greenblatt's magic formula means the current value, i.e. the value that result from the current share price. The true value of the company could be quite different from this figure. That is exactly the kind of divergence we are looking for. We are looking for companies that are actually worth much more than the current share price would have us believe.

The magic formula - return on capital and earnings yield combined

Example: So if a company or a share has the highest return on capital (i.e. rank 1) and the third highest earnings yield (rank 3), then the combined value for this share is 4.

If we have done this for all shares and then order the list based on the last calculated value, we have actually already found the result. However, before we actually add the shares to our portfolio, we should remove all shares of banks, insurers and energy suppliers from the list, as the key figures of the magic formula are not as meaningful for these sectors or they are highly regulated sectors.

The magic formula now provides for successively adding the best 30 stocks from the list, i.e. the stocks with the lowest sums, to the portfolio. In this case, successive means about 7 shares per quarter. Conversely, this also means that our initial list must be sufficiently long; i.e. ideally, it should include the entire universe of stocks that are easy to trade. We should then keep each stock in the portfolio for about a year and then replace it with a new top stock from the magic formula analysis.

Regular rebalancing of the portfolio is necessary

However, I think there is nothing to be said against keeping a stock in the portfolio longer, provided it still appears in the list of top stocks according to the magic formula. However, it can be assumed that one of the two, or even both, key figures will tend to approach the average or deteriorate in the medium term.

Of course, there are exceptions to this rule - see e.g. Apple - but in principle, an adjustment will usually occur for the following reasons:

For these reasons, among others, Joel Greenblatt suggests to completely restructure the portfolio after about one year.

In this way, we can use the magic formula as private investors.

The concept sounds quite conclusive so far. The magic formula has already been tested by other analysts and, in retrospect, has apparently actually beaten the market.

For us as private investors with a focus on American and non-American markets, or at least as taxpayers in different countries (Currently I am living in Germany!), two questions now arise:

The data for Greenblatt's magic formula

We only need two data points to apply the magic formula, but we need them for a large number of shares or companies. Theoretically, there are now several ways to obtain these key figures:

But what we can do first, and Greenblatt also suggests this as an option in his book, is the following:

We can take the inverse price-earnings ratio (P/E or price-earnings ratio) in place of the EBIT / EV profit return, and the return on assets (or return on assets, ROA) or return on equity (or return on equity, ROE) in place of the return on capital. However, we must be aware that by "factoring out" debt we more or less distort the earnings yield. Greenblatt's EBIT is in fact the profit before deduction of debt interest and taxes, the P/E ratio is based on the net profit after deduction of interest and taxes. Greenblatt explains the whole thing with a simple example:

Example: Two companies each have a turnover per share of USD 1,000 and an EBIT (earnings before interest and taxes) of USD 100. The only difference is that company B (or share B) has taken on debt of USD 500 and has to pay 10% interest on it. The simplified income statement for the two companies then looks as follows:

This also makes sense from an operational point of view, because both companies actually generate the same earnings per USD turnover. Therefore, the processes, production, sales etc. seem to be about equally efficient.

If we nevertheless decide to take e.g. P/E and ROE for our version of the magic formula, then we can well take the data from Finbox, WallStreetZen or Yahoo Finance. The whole thing will involve some effort, but should work in principle. However, we should be aware that it is only an approximation.

By the way, for the US market we can fall back on the website magicformulainvesting.com, which was launched by Joel Greenblatt himself. Here, the top-30 or top-50 values can be determined for the respective cut-off date according to the magic formula. It also uses the correct definitions of earnings yield and return on capital. Here are the top 30 values as of September 27th .2021: 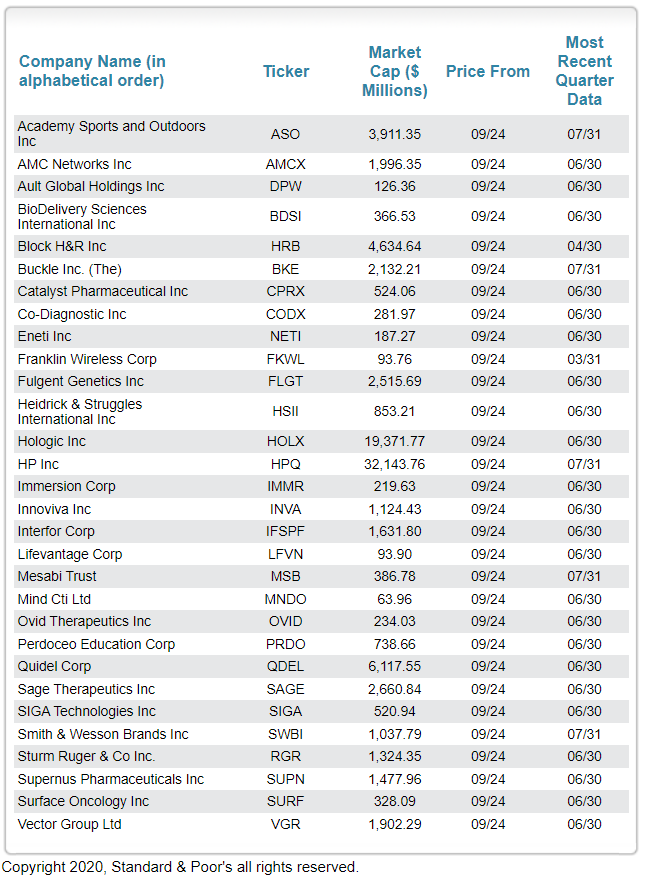 But what about transaction costs and capital gains taxes?

The transaction costs and taxes

In his book, Joel Greenblatt suggests holding all stocks selected using the magic formula for only one year and then rebalancing the entire portfolio. As a US-based investor, he suggests selling loss-makers a little before the end of the year to be able to offset the losses against other gains and selling gainers a little after the end of the year to not have to pay taxes on the gain.

To this end, one must know that in Greenblatt's case there is a speculation period of one year and that after that the profits no longer have to be taxed.

So what to do? My recommendation would be not to apply the magic formula one-to-one due to the high effort for data collection and the high transaction costs / and perhaps capital gains taxes (depends in which country you are living). Alternatively, I would rather use the key figures, i.e. earnings and return on capital, to create a watch list or to pre-filter certain stocks.

Joel Greenblatt has written a very quick to read and easy to understand book with the Magic Formula. The magic formula is theoretically very easy to apply and the concept is very catchy. Moreover, its success is historically proven.

The magic formula is about identifying good companies that are cheap on the market right now. Good companies are identified with the magic formula based on the return on capital. Whether a company is cheap is determined with the help of the profit yield (for Greenblatt EBIT / EV). Then the two ratios are combined using a simple method and the 30 best stocks are added to the portfolio. After one year, the portfolio is reallocated.

For US stocks, Greenblatt has created the website magicformulainvesting.com, where we can access the current top values of the magic formula for US stocks.

Besides the website magicformulainvesting.com, Joel Greenblatt is also the founder of the Value Investors Club (valueinvestorsclub.com). As a member of the club, you have direct access to all investment ideas of the members. Each member must publish exactly two investment ideas per year. The investment ideas on the site are selected accordingly. If you are interested in the concept, you should take a look at this page. However, the focus is, as you would expect, on the US market.

12 Valuation Ratios that you should know as Investor

What is Merger Arbitrage? How It Works and Why Warren Buffett Uses It!

Please log in again. The login page will open in a new tab. After logging in you can close it and return to this page.